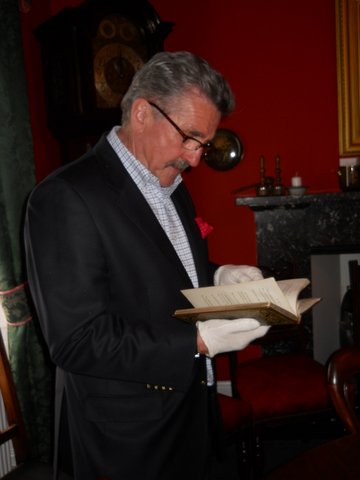 Our library has a large collection of Burns' editions many of which are now out of print.
The club owns some original manuscripts including "The Twa Dogs" and some original letters signed by Robert Burns himself.

Photo: Gerald Davies, former Welsh International rugby player who also played for the British Lions, looking at the Club's copy of Burns' Kilmarnock Edition of 1786. Gerald was brought to the club in 2012 by Bill Nolan, prior to speaking at the Ardrossan Rugby Club dinner.

A National Library of Scotland report of 2004 stated that "material [is] well looked after" and that "Irvine Burns Club should be commended for their care of this collection [the honorary members' letters]".

This unique collection was begun by R M Hogg, a Provost of Irvine (1923-28) and a President of Irvine Burns Club (1905), so there are many interesting volumes, many not related to Robert Burns but possibly no longer extant elsewhere, and many of local and/or literary interest. After R M Hogg's death in 1930, his brother John Hogg, Hon. Secretary of the club, set aside a room in his Bank St home, keeping the precious manuscripts in a safe there, to house the library and host meetings of the directors of the club. After his death in 1936, the surviving sister Miss Margaret Hogg continued the arrangement until her death in 1962. The catalogue of books can be publicly viewed on the Library Database page of this site, though consultation thereafter must be on our 'Wellwood' premises, in normal opening hours or by arrangement with the Hon. Secretary.

The library consists of some 2,000 carefully selected books donated and purchased over many years.

They are divided into:
Burns Works and Criticism
Burnsiana
General Literature and Poetry
Scottish History
Ayrshire History
All the works of John Galt (native of Irvine, 1779-1839)
The works of James Montgomery (1771-1854) another native of Irvine who was known as a Christian poet.
The works of Edgar Allan Poe, who spent some time at school in Irvine.

One item is the five-volume set "Original Scottish Airs" (songs collected by George Thomson, FAS, Edinburgh) (New Edition 1826), gifted to our Museum by Mrs W F Shankland of Kirkcudbright in 1987.

A non-Burns volume is the edition of the poems of Longfellow presented by Irvine Royal Academy, label signed by T R Stuart, Rector, to George Watson for Latin in 1888 - his grandson of the same name records that this subject served him well in his later career as proprietor of The Medical Hall at Irvine Cross.

A special item is the Works of Burns, translated into Albanian, by Dhori Qiriazi (1933-2009), who sent us two copies, one of which is in our library, the other of which we have presented to the Mitchell Library, Glasgow, to include in its excellent Burns section.
Robert Bërns, Poezi, dhe një ese nga T. Karlajli ne shqip nga origjinali: Dhori Qiriazi (Poems: The essay of Thomas Carlyle and Translations from the orginals by Dhori Qiriazi)

Dhori Qiriazi inscribed the volumes: "To Irvine Burns Club - In admiration for my most beloved poet and the most sincere poet in the world. 9 March 2003".

When we sent him booklets, he wrote back: "I saw the photo of the Irvine statue of Robert Burns and I think this is the best statue of the poet that I have seen till now. Also I wish to compliment Colin Hunter McQueen for his album of the life of Robert Burns. My translation of the verses of Robert Burns into Albanian lasted fifteen years and it is the first - and only - translation in Albanian of him from the original language. I am glad to say the poet has lost nothing of his flavour in Albanian. To the crown of world poetry Robert Burns, I am sure, is the brightest jewel. He is very sincere and wrote in an unaffected way the truth and only the truth." (See Qiriazi's photo by clicking the mouse above.)

For a flavour of Albanian, here are the lines from Tam O'Shanter, which start "O Tam, had'st thou but been sae wise" where lines 3-6 are telling Tam off for being a "drunken blellum":

Kilmarnock Edition - Poems chiefly in the Scottish dialect, by Robert Burns - Printed by John Wilson, Kilmarnock.
Only 612 copies were printed, cost 3/- (15p).
The club is proud to possess an original copy of this rare and famous book. It was estimated that there are fewer than 30 known copies of the book extant, but Allan Young of Florida lists 74 copies of which 42 are in universities, 22 in libraries, 8 in museums and 12 in private hands.

Edinburgh Edition - Poems chiefly in the Scottish dialect, by Robert Burns - Printed for the author and sold by William Creech, Edinburgh.
3,000 copies were printed, cost 5/- (25p) to subscribers, 6/- (30p) to non-subscribers.
The book is dedicated to the noblemen and gentlemen of the Caledonian Hunt. Apart from its contents it is also an interesting social document as it lists in some 40 pages the majority of the subscribers. It is a "who's who" of the aristocracy of Scotland: the legal profession: army officers: clergy, of various denominations: medical profession: merchants of all hues, personal friends and farmers.

We possess six of the original manuscripts which Burns sent to John Wilson, printer, Kilmarnock, for his famous Kilmarnock Edition, published on 31st July 1786.

The manuscripts cover the first five poems and the thirteenth, viz.

The Twa Dogs (illustrated; the lines above and
below the words "Twa Dogs" are printing directions)
Scotch Drink
The Author's Earnest Cry and Prayer
The Holy Fair
The Address to the Deil
The Cottar's Saturday Night

These manuscripts were originally in the possession of Burns' friend Gavin Hamilton, lawyer in Mauchline and the poet's landlord at Mossgiel Farm.

They came into the possession of (probably as a gift from Gavin Hamilton) his relative Hamilton Robinson, originally an apprentice in Hamilton's office - he later set up business on his own account as a lawyer in Irvine, where he died. His widow married Mr Alexander Campbell, the Burgher Kirk Minister (1809-1843) in Irvine. In 1837 Mr Campbell gave the manuscripts to Mr Patrick Blair, another Irvine lawyer, and a founder member of the club, for the Club.

These precious heirlooms, 17 folio sheets, have been jealously guarded and preserved for posterity. So far as can be ascertained they are the only surviving manuscripts of the Kilmarnock Edition. They are inlaid in Dutch hand-made paper, and secured between sheets of glass, each of the six volumes bound in Levant morocco.

Here you can view the pages of the "Twa Dogs" manuscripts (click to enlarge):

The Club possesses two original letters from Robert Burns to his friend David Sillar (purchased in 1975 from the Rev. David Sillar, Wetherby, Yorkshire, a great-great- grandson of Sillar).

Both letters were written from the poet's farm, Ellisland, Dumfriesshire, and are dated 5th August, 1789, and 22nd January, 1790. They are warm friendly letters and deal with Burns obtaining eleven subscribers for Sillar's own book of poems published in 1789.

A letter dated 29th March, 1834, from Robert Burns, eldest son of the poet to his sister Betty, recounting the death of their mother Jean Armour Burns.

A copy of a speech partly in poetical form given by David Sillar, as Vice-President of Irvine Burns Club at the inaugural celebration dinner in January, 1828. The manuscript is in Sillar's handwriting and was presented to the Club by his son Dr Zachariah Sillar, M.D., President of the Club 1830-31.

Testimony of Mary Lapraik, daughter of John Lapraik (1727-1807), farmer, Dalfram, Muirkirk, Ayrshire. Burns wrote two very fine verse epistles to Lapraik as "An Old Scottish Bard". The testimony details her personal knowledge of the Poet and was given before a panel of club members in 1840. It is signed Mary Lapraik.
The text reads: "The following certificate regarding the striking resemblance which Mr Dick's plate bears to the illustrious Bard is from Mrs McMinn, Wellwood, Muirkirk & dated July 25, 1840:
I well remember Burns giving my father his long promised visit, and I do well remember the fascinating deportment of the Bard on that occasion & when viewing the picture, it strikes me as being an exact likeness, any alteration tbat I can discern is in the dress, he appears to be in his church dress, whereas, when he visited my father, he seemed to have been just hauding the plough, although he was clean and respectable. [signed] Mary Lapraik."