This fine work by James Pittendrigh Macgillivray  marks the poet's links with the town where he first had the idea of publishing his work.

read about the statue and the 1896 unveiling

The bronze statue, set on a pedestal of Aberdeen granite, shows the poet "in contemplative mood, standing on a peak". His right foot rests on a boulder, and his plaid is flung over his knee. His hair is tied behind, as was his custom. He faces Alloway.

Macgillivray was described at the time as "the most virile and original exponent of the newer school of sculpture", as he sought to establish a more modern style. Aiming to express emotion and character, he rejected the placid portrayal of Nasmyth, creating instead a bolder, more moody figure of Burns, full of pent-up energy, and seemingly caught up in the creation of his work. Macgillivray was appointed Sculptor Royal for Scotland in 1921.

Read on for: - the sculptor - the public reaction in 1896 - the donor - & the panels on the pedestal
and further down this page - the 1896 newspaper report of the unveiling ceremony 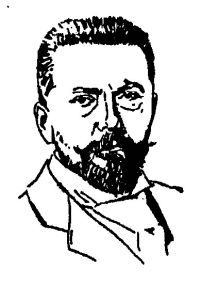 James Pittendrigh Macgillivray (1856-1938), R.S.A., LL.D., was apprentice to sculptor Wm Brodie, R.S.A., Edinburgh, and moved to Glasgow in 1875. He was the only sculptor among the talented young painters later known as the Glasgow School. He was a founder and editor of The Scottish Arts Review. In 1896 he returned to Edinburgh, designing his own house with a large studio.

The Irvine statue led to a number of large public commissions, culminating in the grandiose Gladstone Memorial in Edinburgh. Macgillivray, also known as a painter and a poet, was an ardent Nationalist, an authority on the Clans and their tartans, and an Honorary Member of the Scottish Pipers Society. He was a man of wide culture, varied interests, and vigorous ideas.

Public reaction to the portrayal of the poet was initially mixed; the sculptor himself, to his amusement, was told by a townsperson who had not recognised him, "You're the first I've heard saying it wisna bad!" Very soon, however, there was a consensus of approval for the unsentimental interpretation.

Great care had been taken in deciding the statue's location. The Statue Committee had tried a reduced-size model of it at various points in the High Street and on the Moor; this had allegedly served only "to frighten young horses and leave them minus their owners, their harness and their vehicles". A considerable controversy about its location raged that summer - alternative suggestions being the Low Green and the Shore - with a petition to the Provost three weeks before the unveiling, an argument about planning permission in the Council, many letters to the press (one was a record 13 ft long), and poems for and against, one claiming that the walk to the statue would do the townsfolk good - "twill clear their brains".

Equally contentious was the debate 100 years later, in 1996, about its possible re-location to a more visible position on the large roundabout near the shopping centre, but public feeling, including a protest by the local MP, led to re-landscaping at its unchanged location.

John Spiers left Irvine as a young man and enjoyed a long, successful and, equally importantly, honourable career as an underwriter and insurance broker at Blythswood Sq., Glasgow. His family had long been merchants in Irvine; and his mother and his wife both belonged to the family connected to Edgar Allan Poe. Retired in Seamill, his age and infirmity prevented his attending the unveiling, so he was represented by his two daughters.

His gift of a statue was motivated by what he had been told, in his young days in Irvine, by people who had known the poet, so in a sense the statue is a personal testament from one who had heard at first hand of Burns' character, genius and humanity.

John Spiers was also aware of people's more immediate needs. On unveiling day, he sponsored a breakfast for 320 needy people. Some thirty years earlier, he had been a founder of, and thereafter a benefactor to, the Glasgow-Irvine Society, for those of his native town who found themselves in "decaying circumstances".

The whole life of John Spiers was marked by commercial probity and thought for others. 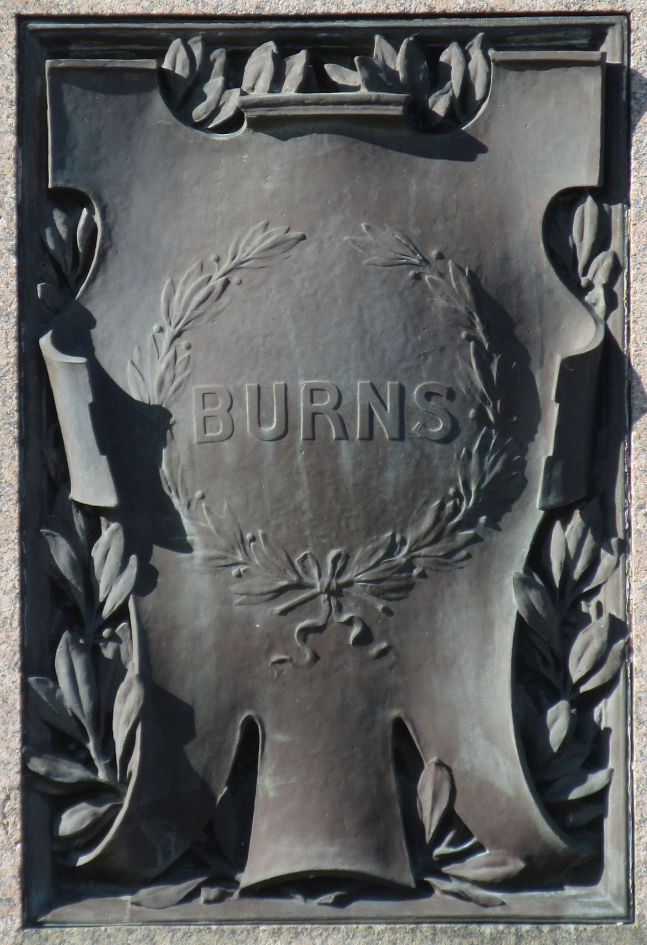 The front panel bears simply the name Burns within a wreath. 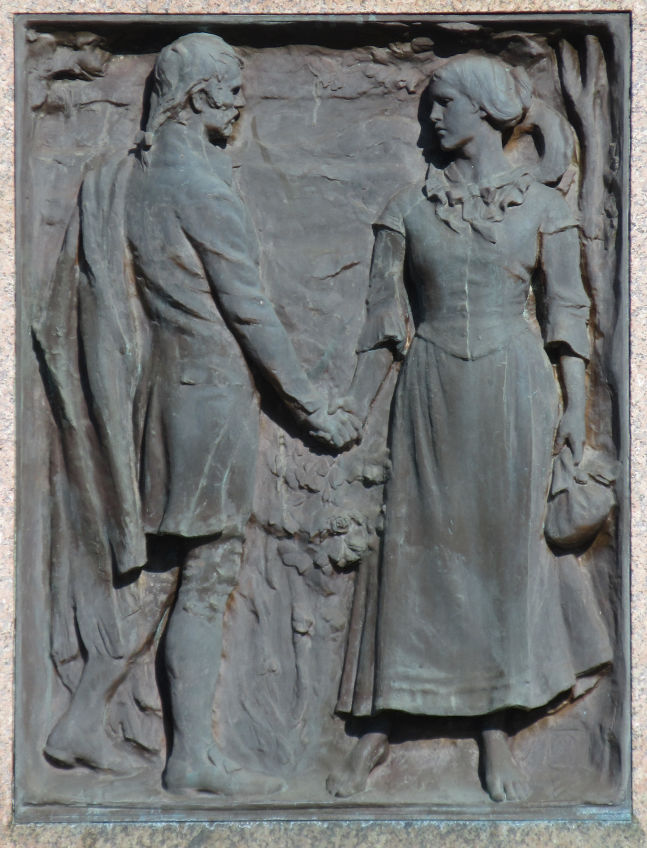 The clear-cut features and expression on the faces bring a pathos as well as a reality to the scene. 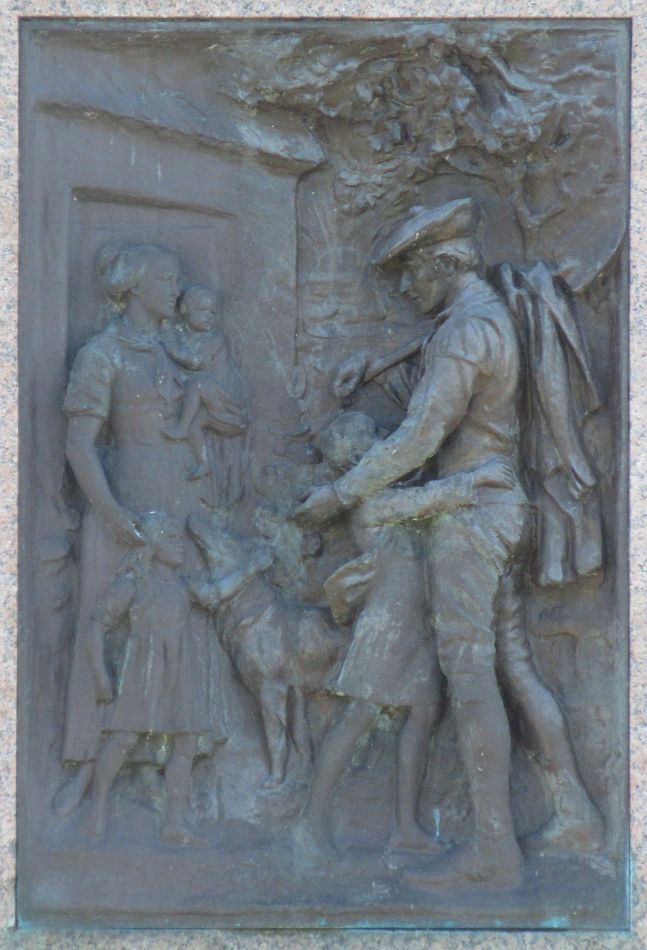 The Cottar and his dog

The rear panel shows the toil-worn Cottar and his dog welcomed home by his wife and children.

Burns' Muse, Coila, places a wreath on his head

Three of the panels were put in place the week after the unveiling, as they had gone astray in transit from Brussels.

The 18th July 1896 saw perhaps the greatest influx of visitors that Irvine has ever seen, before or since. Being a Saturday, and during the Glasgow Fair, the throngs of townsfolk were swelled by large numbers of day trippers. Visitors arriving at the station were "delighted with the bunting and decorations, the flag fluttering from the balustrade of the Big Kirk, and streamers across Bridgegatehead".

Events began with the 9.00 am free breakfast in the Templars Hall for the needy of the town. In the streets the crowds mingled with those preparing to parade - Shepherds, Freemasons, Orangemen, and Irish National Foresters. There were street musicians, an Italian organ-grinder with his monkey, and of course the "Irvine Herald" artist who sketched figures such as the kenspeckle characters in "Some Early Arrivals" to ensure that the newspaper report was illustrated (as few were in those days); also, a travelling photographer set up his tent and "tin-typed many young ladies and gentlemen". Some shops had a half-day "in honour of Burns", and John Neill the grocer was selling a specially labelled "Burns Statue Blend Old Highland Whisky".

Long before noon the High Street was well nigh impassable; at that time, the bellringer began to sound the joybells for a full hour during the reception in the Town Hall. 700 pupils of the elementary schools assembled in Bank Street School, where they were presented with the special commemorative medals (shown below). 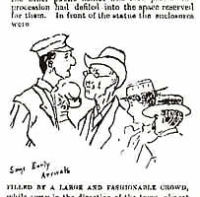 The procession out to the Moor was a long one - the Boys Brigade, the pipers, the pupils, the Carters (with shining banners and gaily caparisoned horses), more pipers, the Volunteers, Halberdiers, the Provost, Magistrates and Council, Poet Laureate Alfred Austin, the sculptor, the Statue Committee, the Trades, the Burgh School Band, the Parish Council, over 15 Burns Clubs representatives, over 8 Town Council representatives, more Volunteers, Fusiliers, and Masonic Lodges.

The ceremony included Masonic rituals to confirm the secure positioning of the sculpture, a speech by the Poet Laureate, the formal handover of the statue by Mrs Spiers (daughter of the donor) to the Provost, and granting of the freedom of the Burgh to John Spiers.

Later, at 4.00 pm, there was a banquet in the New Drill Hall on East Road, with over 300 guests, followed by 13 toasts. Wisely, the Poet Laureate left unspoken some less favourable ten lines on "Burns the man", though they appeared in the "Times" transcript of his address; his Irvine oration was scathingly attacked by the "Glasgow Herald" on the following Monday.

The townsfolk had looked forward with anticipation to the great day, and their hopes were well rewarded by the turnout. was dull throughout, with slight rain at the end of the ceremony; not that the weather, or the ceremony, mattered much to the subjects of this sketch - a "hay-hatted dude and his best girl - apparently honeymooners - exchanging sweet nothings and taking no interest in the proceedings".

The following day, Sunday, saw quite a number walking out to view the statue, though there would have been more "if old Jup. Pluv. had been less lavish with his Scotch misty favours" - it must have been quite wet that day. 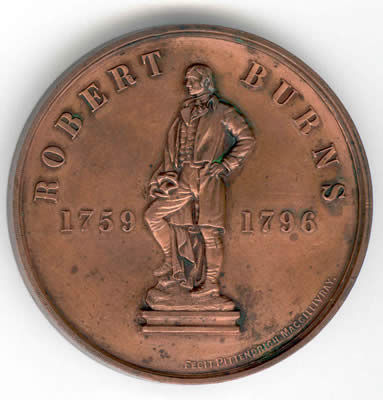 These medals were given to the 700 pupils of the elementary schools in Irvine (and perhaps to others).

The inscription at lower right reads:
FECIT PITTENDRIGH MACGILLIVRAY
('Made by Pittendrigh Macgillivray') 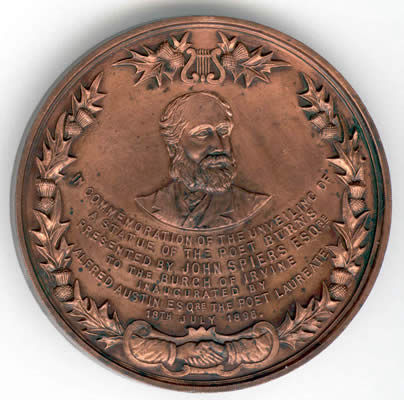 IN COMMEMORATION OF THE UNVEILING OF
A STATUE OF THE POET BURNS
PRESENTED BY JOHN SPIERS ESQRE
TO THE BURGH OF IRVINE
INAUGURATED BY
ALFRED AUSTIN ESQRE THE POET LAUREATE
18TH JULY 1896.

with (at top) the lyre of song and poetry, the thistles of Scotland, and (at foot) the linked hands of brotherhood 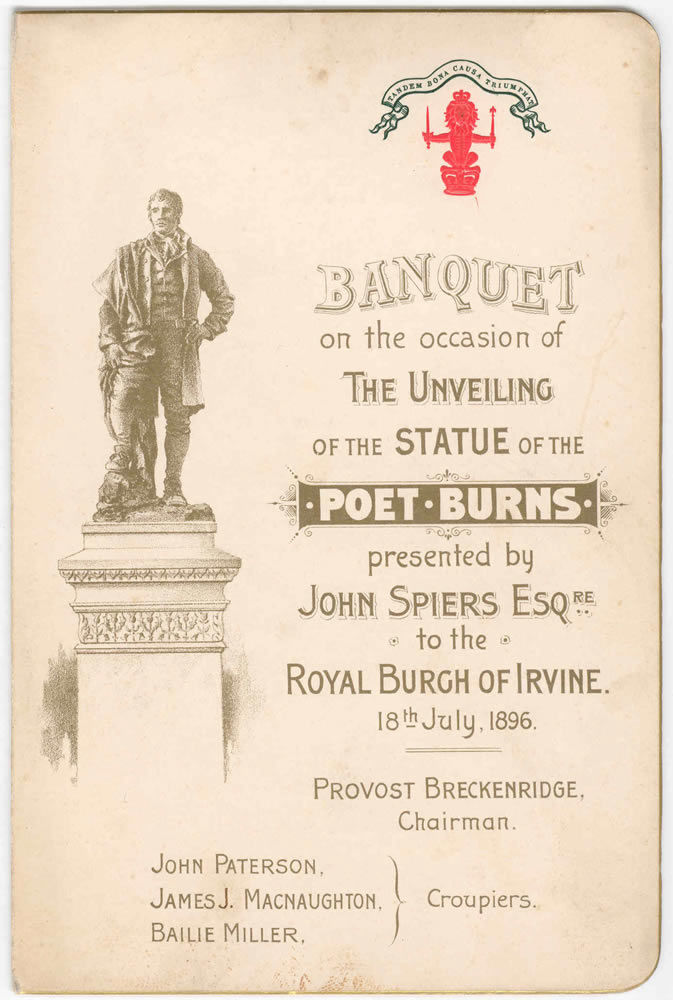 300 diners were treated to a banquet in the New Drill Hall, on East Road (a building since replaced by the Volunteer Rooms) Learn more...

The banquet was a splendid affair, for 300 diners, at 4pm on the day of the unveiling, 18th July 1896, as we know from the banquet programme here displayed.

The entertainment consisted of eight pieces of music, under the supervision of E H Green, Bandmaster, of the 4th Argyll and Sutherland Highlanders.

The Toast List was 14 toasts long - The Queen, The Prince and Princess of Wales and the other members of the Royal Family, The Navy Army and Reserve Forces (with replies for all three!), Both Houses of Parliament (with replies by Lord Blythswood and Sir Wm Arrol, MP), The Provost Magistrates and Town Council of the Royal Burgh of Irvine, The Immortal Memory (by Poet Laureate Alfred Austin), The Donor of the Statue (by Mr Paterson, a friend from childhood), The Grand Master and Craft, The Sculptor, The Poet Laureate (by the Rev. Henry Ranken), Burns Clubs, The Statue Committee, The Chairman, and The Croupiers.

research by Past President Ian Dickson, with acknowledgement to the "Irvine Herald" for information and sketches from the issues of 1896