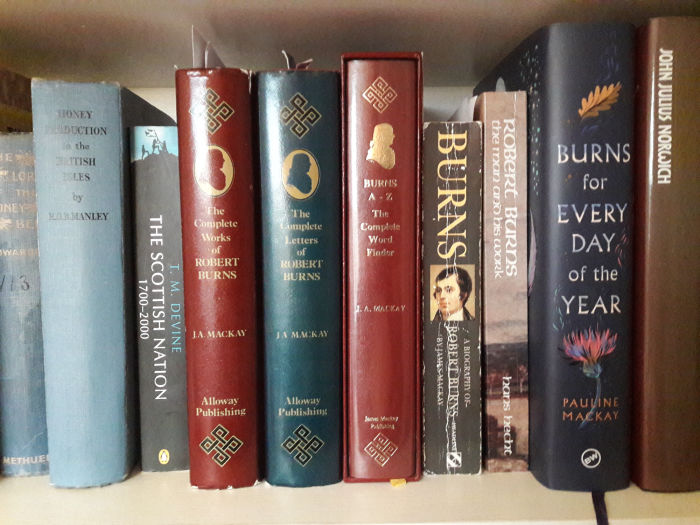 This unique collection was begun by R M Hogg, a Provost of Irvine (1923-28) and the 1905 President of Irvine Burns Club, and there are many interesting volumes, many not related to Robert Burns but possibly no longer extant elsewhere, and many of local and/or literary interest. After Hogg's death in 1930, his brother John Hogg, Hon. Secretary of the club, set aside a room in his Bank St home, keeping the precious manuscripts in a safe there, to house the library and host meetings of the directors of the club. After his death in 1936, the surviving sister Miss Margaret Hogg continued the arrangement until her death in 1962.

One significant donation was that of Mr Arnold F. McJannet, who gave the Club a complete set of 64 First Editions of John Galt's Works.

We offer limited public access to our library database, to allow those interested to view the catalogue before visiting

The club is proud to possess an original copy of this rare and famous book. It was estimated that there are fewer than 30 known copies of the book extant, but Allan Young of Florida lists 74 copies of which 42 are in universities, 22 in libraries, 8 in museums and 12 in private hands.

Our copies of these editions are not normally on view to the public, in order to ensure their careful preservation.

Edinburgh Edition (1787) - Poems chiefly in the Scottish dialect, by Robert Burns - Printed for the author and sold by William Creech, Edinburgh.

The book is dedicated to the noblemen and gentlemen of the Caledonian Hunt. Apart from its contents it is also an interesting social document as it lists in some 40 pages the majority of the subscribers. It is a "who's who" of the aristocracy of Scotland: the legal profession: army officers: clergy, of various denominations: medical profession: merchants of all hues, personal friends and farmers.

We could highlight many individual volumes, but here are three items which suggest the range of contents.

Another volume is the edition of the poems of Longfellow presented by Irvine Royal Academy, label signed by T R Stuart, Rector, to George Watson for Latin in 1888 - his grandson of the same name records that his Latin studies served him well in his later career as proprietor of The Medical Hall at Irvine Cross.